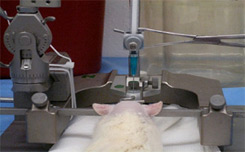 Also known as Behavioral studies, we conduct these to study the potential of a substance to be a neurotoxin which alters the normal activity of the nervous system. This can eventually disrupt or even kill neurons, key cells that transmit and process signals in the brain and other parts of the nervous system.

We observe symptoms that may appear immediately after exposure or be delayed. They may include limb weakness or numbness, loss of memory, vision, cognitive and behavioral problems and sexual dysfunction.

In our non-GLP neurotox studies we use a minimum number of animals and end-points since these are intended to provide data used to make a go/no-go decision with respect to the a potential GLP study in the animal model chosen.